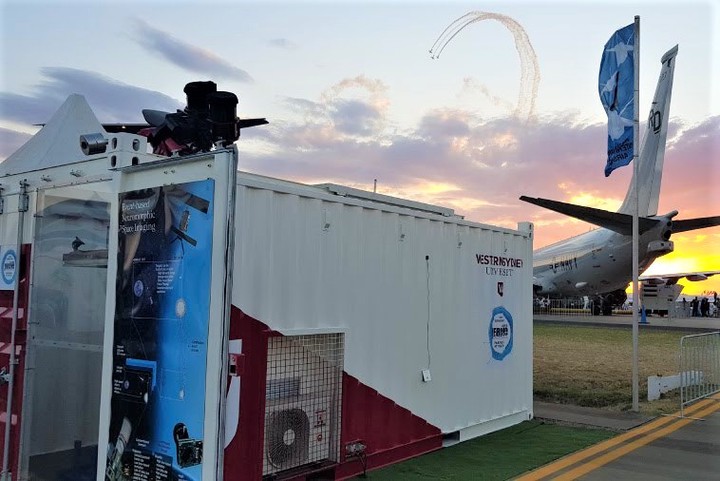 The Astrosite at the Avalon Air Show. Image Credit: Nic Ralph
The Astrosite team has won the 2019 Misha Mahowald Prize for Neuromorphic Engineering. Find out more from the press release available from Western Sydney University and from iniForum.

The Astrosite: What is it?

The Astrosite is our custom-designed mobile telescope observatory built specifically to track and detect objects in space using our novel neuromorphic camera technology the algorithms that we have developed for them. These observatories are built into a standard 20ft shipping container, which means that they can be easily transported anywhere, and rapidly deployed to track satellites and space junk.

Fitted with a sliding roof and a special lifting platform, the telescopes in the Astrosite can be raised above the roof of the container to see the entire sky. When not needed, or during periods of bad weather, the telescopes retract safely back into the shipping container and the roof closes. The Astrosite system can do things that normal optical telescopes cannot do because of the unique way in which neuromorphic cameras “see” the sky. For example, the neuromorphic cameras can see during the day and are also able to see whilst the telescope is moving, both of which make the Astrosite uniquely able to be moved and used around the clock.

The primary role of the Astrosites are to provide data for space situational awareness and space traffic management. The concept for the project, the design, and the commissioning were all undertaken by the International Centre for Neuromorphic Systems (ICNS), leveraging our knowledge and skills to translate our research into a real-world and demonstratable capability for Australian space research and Defence. The official Western Sydney University homepage for the Astrosite can be found here.

Why is tracking satellites and space junk important?

Our world is heavily reliant on our space infrastructure and space-based technologies for almost every facet of modern life, and the interest in the use of space is growing rapidly. The ability to reliably detect and track objects in orbit is critical for the safe and sustainable use of space in the future, and is a fundamental step required before we can start to implement policies or laws around the sustainable use of the orbits around earth.

This problem has been compounded by the recent and dramatic drop in the cost of space launches has created an immediate need for better methods for detecting and tracking objects in orbit around the earth, as the cost of collisions in space poses a significant risk to both our space infrastructure and future space missions.

Space Situational Awareness (which is now being renamed as Space Domain Awareness by the US Air Force), and Space Traffic Management (STM) — its civilian counterpart — are therefore critical tasks for regulation and enforcement of the use of space, and to prevent a future catastrophic space event, such as described by the Kessler effect. Space Situational Awareness is defined by the European Space Agency (ESA) as comprising three segments: Space Surveillance and Tracking (SST), Space Weather, and Near Earth Objects (NEO).

What does the Astrosite do differently?

Currently, the majority of SSA data originates from dedicated radar installations operated by the United States Air Force. However, radars are an expensive technology to install and operate and there is an increased focus on looking toward optical telescopes to provide a more flexible, cost-effective, and responsive means of obtaining accurate SSA data. In our previous work, we have demonstrated that event-based neuromorphic cameras offer a novel means of performing SSA tasks and provide capabilities that cannot be achieved using conventional astronomy cameras.

These benefits include the ability to operate during daylight conditions, the ability to image through a wide range of lighting conditions, and the ability to perform continuous and frame-free sky imaging. We have successfully demonstrated these abilities on terrestrial telescopes and are currently undertaking further research into high-speed adaptive optics applications, distributed networks of optical telescopes, and even a number of opportunities to place cameras into orbit to explore their performance and capabilities from a power, size, and weight constrained platform.

The Astrosite project represents the development of a real-world system based around this technology. It was designed and built as a showcase for the unique capabilities that a neuromorphic approach to sensing can offer to space situational awareness sensing. It consists of a complete telescope observatory built into a standard shipping container. The container has a sliding roof and a scissor-lift platform, allowing the telescope to rapidly be deployed. One of the major advantages offered by the Astrosite is the ability to tolerate motion, and thereby avoiding the need to stabilize the telescope, allowing the container to be rapidly moved and deployed as needed.

The Astrosite was first unveiled at the 2019 Avalon Air Show, and was then deployed to the deserts of South Australia to participate in a series of space tracking trials. The results of the trial were very successful, and have led to new event-based algorithms and neuromorphic approaches for tracking and detecting objects. We are currently exploring options to expand the Astrosite into a network by building additional units and placing them around the Australia.

In addition, our work on space imaging has generated significant interest in the field of neuromorphic engineering. The Astrosite garnered significant media attention, including being featured on both Australian news outlets and the BBC World Service. As a result, we have received significant funding to develop and explore event-based space imaging, allowing us to expand and grow our research team. This interest has led directly to an increased interest in other aspects of neuromorphic engineering and computation.

Media Coverage of the Astrosite

The @MARCSInstitute #research team that created the Astrosite™ – an innovative space imaging method – has been announced as the 2019 winner of the prestigious Misha Mahowald Prize for #Neuromorphic Engineering https://t.co/DV7iKEFaao pic.twitter.com/Yda7zHDArF